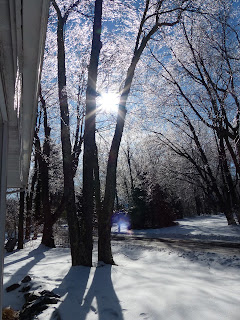 Today, as I watched a February rain diminish the snowy blanket on our land, I began thinking about the soil it covers.  Those of you who know me know how much I like walking around barefoot.  What you may not know is how much I look forward to stepping out sans shoes in the early spring when the ground’s barely thawed and the earth is just waking up to its regeneration.  The ground, still wet from the snowmelt, invites my toes to explore the tiny life under them, my soles and heels to settle into the softening soil.  The cold has an odd rejuvenating effect on me, a promise that this ground will soon be warm enough to sustain the germination of the seeds and the awakening of the roots that will produce the uncultivated greenery that is our lawn.

Now, with February almost half over, we are entering sapping season.  In my former life in the village of Millbrook I tapped two large maples in our village yard.  A rudimentary fireplace sat on a corner of our driveway behind the house.  I’m not sure what the doctor who owned the place before us used it for, but it was big enough to support a large pot on the grate over the flame so I poured sap into the pot, stoked the wood fire, then sat in a lawn chair in front of it and whittled a walnut dowel while the sap boiled down.  I spent hours whittling, thinking, watching, smelling, until I deemed the fluid had reached a point where it needed more heat than the fireplace could provide.  I ferried the hot pot inside and put it on the gas stove for the last part of the sap's transition.  I turned the heat to high and watched as the fluid bubbled furiously, boiling away excess water.  Water boils at 212°F but maple syrup boils 7° higher, so suddenly the boiling stops and the fluid settles for however long it takes to raise the temp to 219°.  When that happens the golden brown fluid is engulfed in a blanket of tiny bubbles and you have maple syrup!  I don’t know, or care, if that follows any official recipe.  I’ll let commercial sappers debate the nuances of grades of syrup.  What I do know is we had enough tasty syrup stored away from those two trees to last us until next season.  And it was good!

And yes, I was often tending the fire outside with my bare feet propped on the warm bricks of the fireplace.  I didn’t go barefoot in the snow, that stopped when I was about fifteen, but as long as the path between the trees, the fire, and my house, was snowless, I was shoeless.,

Musings from the Road Issue #1

For those not already aware of our penchant for naming our vehicles, the Jayco camping trailer we own is Mocking Jay and the Honda Ridgeline we tow it with is The Hulk .  I decided to write a kind of travelogue during our trip to Eugene, Oregon and back.  Here's the first issue. 8/11/2021 We agreed to try leaving for our camping journey west by 0700, with 0800 as a “must leave” time.  We were on the road at 0758 after I struggled to attach Mocking Jay to The Hulk ’s hitch. I just wouldn’t drop over the hitch ball.  Finally, I put a dollop of what Carol identifies as Funny Purple Grease on the ball and voila!     I had The Hulk checked out, oil and filter changed, fluids topped, tires and brakes checked, etc. a few days earlier and intended to pump the tires up to forty pounds from the usual thirty-five before we left to improve mileage.  I didn’t.  I also intended to check and pump Mocking Jay ’s — also didn’t.  Our 495 +/- journey over the Appalachians, was accomplished at 10.