August 4th –
Glendive, Montana, home of some famous dinosaur fossil beds.  We are at campsite 8 in Makoshika State Park.  It is 96 degrees at five pm and the late afternoon thunderclouds are forming along the western ridge.  We are bounded by sandstone hills in this desert; the layers of sediment so perfectly horizontal as to make one think they were placed there by some gigantic master stonemason.
One thing Carol and I have noticed about the small cities we’ve traversed in both Idaho and Montana is that they seem healthy.  There’s no evidence of boarded up shops in the downtown areas and the surrounding residential blocks appear well cared for.  I’m not sure what that says about anything, it’s a curiosity though.
The evening thunderstorm has arrived.  In general, they last several minutes with rain of varying intensity and sometimes, spectacular lightning.  As a reward for being cooped up inside the Traveler for the duration of the storm, we have twice been treated to a rainbow.
It has just turned into a hailstorm.  Cool. 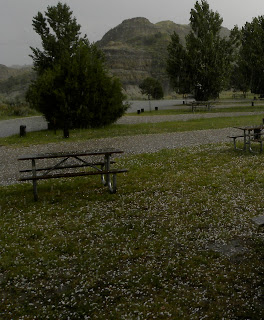 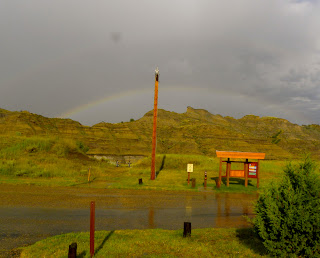 Rainbow number three
The handle “Big Sky Country” fits Montana.  Even with the mountains and rolling hills in the way, the sky seems to go on forever.  One kinda cute thing about the state is the number of places with “Lewis and Clark” in the name.  If I didn’t know better I’d swear they settled the place instead of passing through it on their way to the Pacific Ocean.  We’ve had good experiences in this state both, this year and last.  I highly recommend a trip out here.  Tomorrow’s plan is to browse around Glendive for a bit then take a relatively short run into North Dakota.
August 3rd –
We left Craters around eight this morning, after one last loop around the road.  When we reached Arco we had a choice between going north to Salmon and into Montana at Missoula, or driving east to Idaho Springs then turning north on I-15 into Montana a ways south of Butte.  Carol chose the second.   About sixty miles into The Big Sky state, we pulled off the interstate into the town of Dillon where there was a visitor center.  We got info from there, coffee from a Starbucks squirreled away inside a huge Safeway market, picked up some groceries while we were there, then got back on the road.
We’re camped at Lewis and Clark Cavern State Park, about thirty miles east of Butte.  I’m writing this while sipping from a cold can of Scape Goat Pale Ale, a brew from Big Sky Brewing Company in Missoula that claims, “We make water fun.” Their motto, printed on the side of the can, “Always drink upstream from the herd.”  Anyway, it’s a pretty nice ale.   My first can of it fell victim to my … I don’t know what to call it when one hurriedly folds up a chair in order to stash it under the Traveler, forgetting that a nearly full can of Scape Goat was residing in the cup holder.
We hiked to the Jefferson River, going out by way of the actual trail but returning on the road we’d taken to get to the park, about two-and-a-half miles round trip.
Carol is picking through dirty laundry right now.  She was allegedly setting up to cook dinner while I go shower.  Got sidetracked I guess.  I asked why and she informed me that she was going to wash out some underthings so we didn’t have to spend a lot of time doing laundry.  The laundry bag is nearly full however, so I think the two bras she has hanging from tree limbs outside are kind of a study in futility, especially since we’ll probably get some more rain this evening.
By the way, the weird power issue I had with the shoreline seems to be just a fluke.  I’m plugged in now and everything is working fine.  I still think the batteries are trashed but will have to keep an eye on their performance when they are the primary source to be sure.
We’re about eight hundred twenty miles east of Eugene, after two-and-a-half days actual driving.

August 2nd –
There’s been an unusual amount of rain up here.  We arrived in a thunderstorm and it rained off and on for a couple of hours today.  One of the rangers said it rained for three hours solid on the 31st.  Makes for interesting discussion in a desert.  This is a place of images.  I could try to describe the features but I believe a photo or two will do the trick much more effectively than my words. 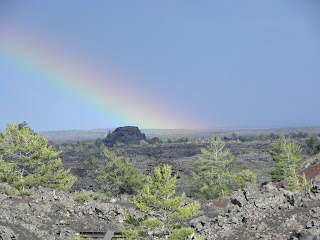 Hilltop ten feet from our campsite 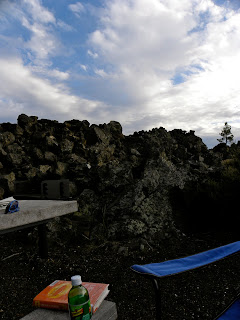 We met a pika, a chattery little squirrel-like critter native to the lava bed, who apparently lives in the huge limber-pine tree, about three-feet in diameter, at our campsite. 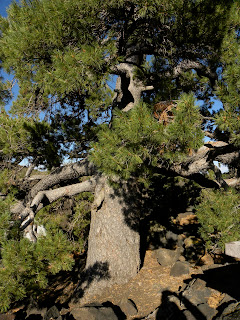 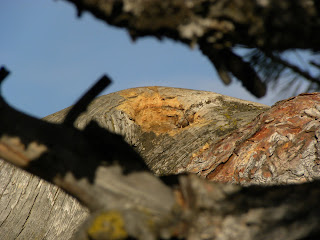 Pika's Home
It objected to our presence by lecturing us at length before disappearing into his/her home.  The critter below is not a pika, it’s a chipmunk.  The pika wouldn’t pose for me. 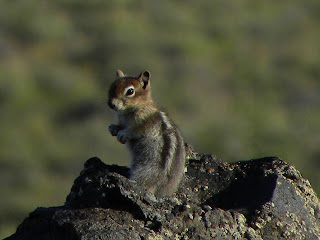 I will put up a photo array of Craters of the Moon images on Gunkswriter.com when I get back home.  The place is just so amazing, visually.  Carol and I agree that it approaches Chaco Canyon as a favorite national treasure.

August 1st –
Shopping in Mountain Home, Idaho, preparing for a few days in Craters of the Moon National Monument; 750,000 acres of lava bed.  Maybe not the most exotic place in the US but I think it’s close.  I’ll enclose a few pictures.
The mishap we had with Ray and Judy’s popped circuit breaker seems to have trashed the cabin battery pack; it won’t hold a charge.  Hmm … maybe that needs a bit more explanation.  Ray and Judy are Doug and Lynn’s wonderfully generous neighbors.  They offered to let us use their driveway, connect to their water, and plug into their porch outlet for the duration of our stay.  When I parked in the designated spot I needed all fifty feet of thirty-amp cord, and my twenty-amp adapter to attach to the outlet Ray showed me.  Once I hooked up, I saw that we weren’t getting anything much out of it.  I put the blame on the combination of the cord length and the drop to fifteen amps, but figured it was at least keeping the batteries charged, wrong.  The connection had apparently popped a breaker in their house, but the circuit is virtually unused except for some kind of nightlight in their laundry room.  Judy noticed it on the evening of the second day by which time the batteries had been discharged for many hours.  The discharge – charge cycle is normal for this type of battery so all is well as long as it doesn’t remain discharged for an extended period.  This could be an expensive lesson in paying closer attention to things.
July 31st –
Doug and Lynn’s wedding reception was … was beautiful, friendly, special, … pick an adjective, it was all those things.  I met many of their friends and I think all of Lynn’s family – two sisters, Sally and Kim.  The three boys were there: Taylor being Taylor with girlfriend Andrea, Will with girlfriend Laura, and Cody with girlfriend Margeaux.  Both Will and Cody performed with their groups so we had terrific entertainment.  The meal was potluck and awesome.  Wine, beer and champagne flowed freely.  When the evening ended, meaning when all the people over forty had gone to bed, the younger crowd did a bunch of cleanup so there was no disaster facing us in the morning, only a bit of packing up of dishes, glasses, etc. for the party supply company to pick up.
We left about noon hoping to get as far as Clyde Holliday State Park in central Oregon.  We got pulled over by the county sheriff a few miles before we got there.  I thought for speeding but he said there was a complaint that I was passing on curves and driving recklessly – Not.  Anyway, he apologized but said he had to react to the complaint.
When we arrived at the park, only overflow camping was available, so we overflowed.  We took showers in the morning knowing that Craters of the Moon had none.