The past couple weeks have not been my best.  It all started when Carol and I bought a comfy old, heavy reclining chair from a neighbor.  He and his son moved it into my utility trailer, and I hauled it to our place and backed it into Carol’s garage (it’s the one attached to the house.)  I managed to wrestle it down the trailer ramp and, using a short board, got it up the single step into the hallway at the top of our basement stairs. 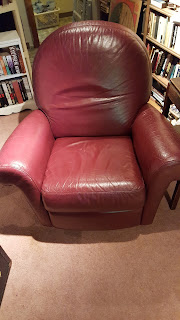 One would be correct to say it went downhill from there.
First: Carol left for a meeting.
Second: I reasoned that if a ramp worked to get the recliner up one step, a longer ramp would work to get it down the basement stairs.
Third: I actually had a plank long enough.
Fourth: I decided I could do it alone.
Fifth and probably most significant: It weighs nearly 100 pounds – I weigh 185.
Twenty-four or so hours after the event (the recliner is in place in the TV room downstairs) I was at my doctor in intense pain with a swollen left ankle.  X-rays (no breaks), pain meds, and finally an antibiotic to handle an infection that was spreading up my leg, and it seems that I’ll live to be stupid again.
While in pain and before my visit to the doc, I tried for some sympathy from my elder daughter so I called and admitted the recliner saga.  “You are in great shape for a seventy-five year old but you have a fourteen year old brain!” was her response.  Next I tried my loving wife.  “Dumbest thing I ever did,” I moaned.  “No, it isn’t,” was her response.
When I related that last exchange to my doctor and friend, he laughed and added “It’s probably not in the top ten.”
So as I get back to what passes for normal in my body, I can’t help but ponder former missteps.  I’m not able to come up with even as many as five, no chance for ten.  That’s probably a function of selective memory and that some of them were so … whatever, that I have self-prescribed amnesia.
Here are a few that I remember:
-       Borrowing my brother’s customized ’51 Ford and flipping it down a hillside while tuning the radio.
-       Hunting for cobras one night in Pakistan while plotting the tiny orbit of Polaris to locate true north. My weapon was a five-foot copper grounding rod.
-       Overindulging one night and throwing up my removable bridge along with whatever else then flushing it down the toilet.  My dentist installed a permanent bridge, making that my most expensive drunk ever.